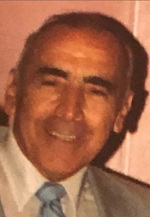 His parents, Filomena and Anthony immigrated from Naples, Italy and started a bakery. As a child, Dominick would walk up and down the streets of Garfield and Lodi selling pizza and bread. He didn’t know it at the time, but one of those walks down Sheridan Street was where he would meet his future bride, Helen. When Dom was 19, he joined the United States Navy and was shipped off to fight in WWII. Upon his return from the war, he worked for the Carpenters Union Local 15 in Hackensack & Lathers Union over 51 years until his retirement in 1990. His number one priority was always his beloved family. Every Sunday dinner, every trip to Wildwood, every Christmas Eve, and every ordinary day was a special one, because we were all together. The ordinary days, of course, included his daily trips to Century Field where Dom & his friends would sit on the park bench, talk and wave to all who passed by.

Dom was a parishioner of Our Lady of Mount Virgin R.C. Church, and a member of the VFW Post 2867, both of Garfield. He is survived by his loving wife of 63 years, Helen (nee Ingenito), his three devoted children, John (Jodi), Loraine (Wayne), and Linda, eight adored grandchildren, Ashley (Todd), Arielle (Cierra), Kristina (David), Alyssa (Nick), Daniel, Cassandra, Michael and Matthew, two great-grandsons, Luca and Francesco, a dear brother, Rocco (Marie), many nieces and nephews, great nieces and nephews. He is predeceased by his parents, Anthony and Filomena Fatuova, and siblings, Anthony, John, Violet Mazza, Martha Ferrandino, Elvira Rigolosi, Rose Pellegrino, and Anna Fatuova.

Visiting Monday 3 to 7 pm. The funeral is Tuesday, February 9, 2021, arriving at the Aloia Funeral Home at 10 am followed by a 11 am mass at Our Lady of Mt. Virgin RC Church, Garfield. Interment St. Nicholas Cemetery, Lodi. In lieu of flowers the family is accepting donations for the Wounded Warrior Project. The Fatuova family is in the care of the Aloia Funeral Home, 180 Harrison Ave., Garfield (973-340-7077). Condolences/Directions visit aloiafuneral.com