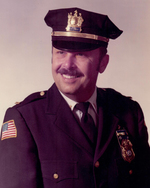 PUZIO, Edward P. , age 85, of Garfield, died peacefully March 20, 2022. He was born and lived in Wallington for 20 years before moving to Garfield 65 years ago. Ed served his country as a Marine for 4 years, before joining the Garfield Police Department. He was a police officer for 25 years before retiring as a Lieutenant. Ed also served from 1989 until 2013 as a member of the Garfield School Board, the Garfield Housing Authority, Garfield Fire Company 4, Garfield VFW, Garfield AARP, Bergen County Republican Organization, and the Lodi Moose. He was an active parishioner of St. Stanislaus Kostka Church and was honored as their 1983 Grand Marshal. He is predeceased by his parents Peter and Violet Puzio, sister Phyllis Janisheski and brother Walter Moskal. He is survived by his devoted wife of 64 years Irene ( Skawinski ), 2 sons Edward “Moose” and Robert ( wife Nadine ), and one sister Denise Surowitz. Visiting Thursday 4 to 7 pm. The funeral is Friday, March 25, 2022, arriving at the Aloia Funeral Home at 8:30 am followed by a 9:30 am mass at St. Stanislaus Kostka Church, Garfield. Interment St. Mary’s Cemetery, Saddle Brook. The Puzio family is in the care of the Aloia Funeral Home, 180 Harrison Ave., Garfield (973-340-7077). In lieu of flowers the family will accept memorial gifts for Garfield PBA, Garfield VFW and St. Jude Children’s Hospital. Condolences/Directions visit aloiafuneral.com