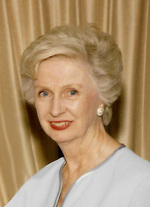 CENCI, Gertrude (nee Kuhn), aged 90, of Wallington, passed peacefully on January 23, 2021. Raised in Union City by Albert and Mary Kuhn, Gertrude was graduated from Emerson High School and Katherine Gibbs Secretarial School. She was a championship baton twirler, competing in the northeast and mid-west. Her exhibitions included twirling two fire batons in complete darkness. Gertrude’s love of twirling led her to share this sport when she opened her own school, The Nendel School, housed at Fairview American Legion Post 365 (where she was drum majorette for their drum and bugle corps) and the New York Chinese School. Her students were regular entrants in the National Baton Twirling Contest. She was a drum majorette for many fife, drum and bugle corps, including The Skyliners and The Hawthorne Caballeros at parades in New York City and environs, and was Bergen County American Legion Baton Twirling Champion in 1952. For many years, she was the undefeated national baton twirling champion. Her stellar twirling performances earned her placement in “Who’s Who in Baton Twirling.” During World War II, Gertrude entertained wounded troops at Fort Monmouth General Hospital and Helen Hayes Hospital. She was regularly featured in Jersey City’s Walter “Pop” Williams charitable entertainment productions, and at American Legion and Veterans of Foreign Wars national and state conventions. Gertrude performed for such celebrated personalities as Francis Cardinal Spellman and New York Governor Thomas Dewey. Gertrude worked as a legal secretary for many years in New York City and in New Jersey. After retiring, she joined the Fairleigh Early Birds Toastmasters Club in Rutherford, where she chaired various committees and was an award-winning Toastmaster. Additionally she was a long-time member of 55 Kip Center in Rutherford, the Lodi Women’s Club and the Women of the Moose. Politically, Gertrude had been a member of the Union City and Lodi Democrat Committees, and the Lodi and Wallington Republican Committees, as well as the Wallington Republican Club, the Bergen County Women’s Republican Club and the Jim Sheehan Memorial St. Patrick’s Day breakfast committee. Gertrude was a member of the Joseph M. Lane American Legion Post 136 Auxiliary in Lodi. A devoted parishioner of St. Joseph’s RC Church in Lodi, Gertrude was the beloved wife (48 years) of Frederick who predeceased her (2011). (They met at a New Jersey American Legion state convention in Wildwood.) She leaves her cherished son, John Cenci and daughter Margaret Frontera, and many friends, to mourn her passing. Gertrude will be missed by all who had the honor of knowing and loving her. Visiting Friday , January 29, 2021 from 3 to 6 p.m. The family will meet Saturday, January 30th at Holy Name Cemetery, West Side Avenue, Jersey City at 9 a.m. Memorial donations may be made to American Legion Post 136, 41 Union Street, Lodi, NJ 07644. The Cenci family is in the care of the Aloia Funeral Home, 180 Harrison Ave., Garfield (973-340-7077). Condolences/Directions visit aloiafuneral.com.