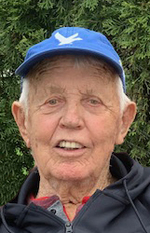 ALLING, Gordon K., age 88, of Elmwood Park, formerly of Garfield, New Jersey passed away peacefully on April 5, 2022. Gordon married his sweetheart, Lois (nee Stephan) in 1954, who survives him. Gordon is also survived by his children, Kenneth, Joyce, Janice, Patty, William, Robert, Kathlene and Gordon. He was predeceased by his son, Edward in 2009. In addition to being the father of 9 children, Gordon, “Pops” as he was known, had 17 grandchildren and 5 great grandchildren.
Gordon served his country in the Marines from 1951-1954, having received the National Defense Service Medal. He spent more than 50 years working as a General Contractor. Gordon was well-known in Garfield and had many memories of time spent with family and friends.
Gordon was one of a kind. He told you how it was and pulled no punches. Gordon was larger than life and His wife, Lois, children, and extended family will miss him.
Memorial Service will be at a later date. Arrangements by the Aloia Funeral Home, 180 Harrison Avenue, Garfield, NJ (973-340-7077). Condolences visit aloiafuneral.com