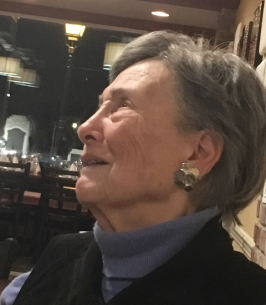 February 4, 1931 - August 4, 2022 Hannah Kit Ellenbogen (nee Kauders) passed away on August 4 in Medford, New Jersey. She was 91. Born in Vienna, Austria, Kits family fled Europe during the holocaust. She was predeceased by her parents, Gustave and Frances Kauders, and her brothers Henry and George Kauders. The Kauders spent three harrowing years traveling from country to country before settling in Forest Hills, Queens, where Hannah spent the rest of her girlhood. By the time she was 10, Hannah had learned to speak three languages and had developed a fierce sense of justice and a steely determination that would last a lifetime. After graduating from Forest Hills High School, Kit attended Bard College where she received a scholarship based on [her] record of achievement as a student and as a citizen. She always credited Bard with saving her life and adopted the name Kit to celebrate this new beginning. In college, she met Saul Ellenbogen, and the pair eventually married. After over two decades of marriage, Kit and Saul divorced, but as a testament to Kits commitment to family, she remained close with Saul until his death in 1991. After receiving her bachelor's degree in psychology in 1952, Kit went on to receive her masters degree in social work at City College of New York/Hunter. In 1973, she became a guidance counselor at Glen Ridge High School where she worked for 17 years. Her no-nonsense approach to college and career counseling influenced a generation of young adults in profound ways. Kit entered Rutgers School of Law at the age of 54. She put her background in education and knowledge of the law to good work in her second career as an attorney for the Education Law Center of New Jersey and then with Advocates for the Children of New Jersey. At ACNJ, Kit dedicated herself to providing help to families with education-related issues. She continued to work as a child advocate lawyer until the age of 80 and always seriously valued the words Thou shall not stand idly by. Kit always showed compassion towards those who were in need and greatly valued the idea of making the world a better place for future generations. No matter where Kit landed, her leadership skills shone brightly. From president of her union in the Glen Ridge school district, to president of the residents association at Medford Leas (her final homebase), Kit was a leader and advocate for all. One of Kits proudest moments was when she received the 2008 John Dewey Award for Distinguished Public Service from Bard College. This award was established to recognize extraordinary contributions to the public sector. Reflecting on her lifes work up to that point, Kit said, I know from experience that theres a lot of injustice in the world. Working with immigrant parents really hits home for me. I delight in telling them what their rights are. Kit would often say with a smile, Afterall, everyone is entitled to my opinion! Kit was a fierce supporter of the arts. She frequented the theater, was an avid listener of WNYC radio, and enjoyed classical music, especially when her sons played for her. At Medford Leas, she organized trips to Philadelphia for concerts and museums for all residents interested. Family and friends across the world mourn the loss of this loyal, loving, and dedicated lady. Kit is survived by her son David of Vermont and her son Anthony and his wife, Kristina, of New Jersey. Kit also leaves behind three beloved grandchildren: Monroe who lives in New York with his son, Ash; Zachary and his wife, Roxanne, of Washington State; and Max and his wife, Maeve, of New Jersey. There will be a celebration of Kits life in Glen Ridge, New Jersey in September. A burial at Bard College will be held for immediate family thereafter. In lieu of flowers, donations may be made to: Bard College, Bard High School/Early College in Newark, NJ, or the American Civil Liberties Union of NJ. The Ellenbogen family is in the care of the Aloia Funeral Home, 180 Harrison Ave., Garfield (973-340-7077). Condolences visit aloiafuneral.com