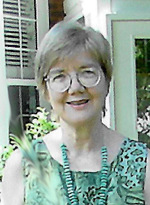 Marlene Graffin (nee Zeitler) passed on from this Earth to be with our dear Lord on December 3rd, 2020. She will be greatly missed by many people.

Marlene was born on April 25th, 1941. to Joseph and Martha Zeitler of Teaneck, NJ. She was raised in a very loving home with her sister Elizabeth (Libby) and attended Immaculate Heart Academy High School. She graduated from Farleigh Dickinson University in 1963. After college,Marlene began working for the Social Security Administration and worked diligently there for 43 years, until her retirement in 2006.

Marlene was married on April 4th, 1970 to Charles (Chuck) Graffin, with whom she had many happy times. They remained married for 21 years. Chuck became ill later in life and Marlene cared for him selflessly for several years until his death in July 1991. He was very special to her.

During her lifetime, Marlene enjoyed many different hobbies. She especially enjoyed music, dancing, traveling, attending live performances, and enjoying time spent with family and friends. She was a very generous woman and donated quite often to her church and local charities and those in need. She also sang in her church choir and volunteered in the rectory. Marlene was a very strong woman who asked for very little and rarely complained about anything. She had a very strong belief in God.

Marlene was predeceased by her dear parents, and her loving sister. She will be missed very much by her devoted companion of 24 years, Dr.. Jack McKinney of Hackensack, with whom she had been blessed to share a very caring, loving, supportive relationship. Marlene will also be missed by Jack’s children and grandchildren, who loved Marlene dearly. She is also survived by her special cousin, Maria, and her dear friends Trudy and Bill, whom she worked with and has remained friends with for over 50 years. Marlene will also be dearly missed by many other family members and friends.

A mass of Christian Burial will be held at Our Lady Queen of Peace Catholic Church in Maywood, on Monday, December 7, 2020 at 11 A.M. with burial immediately following at the George Washington Memorial Park in Paramus, NJ. In lieu of flowers, donations in her memory to your local food bank or a family in need would be appreciated. God put us together to help one another.

The Graffin family is in the care of the Aloia Funeral Home, 180 Harrison Ave., Garfield (973-340-7077). Condolences/Directions visit aloiafuneral.com