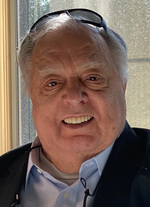 RIGGI, Salvatore C., age 86, of Mahwah, died on October 22, 2020. Born and raised in Garfield for 36 years, he lived in Elmwood Park 27 years settling in Mahwah 23 years ago. Salvatore was an entrepreneur in the insurance and real estate industries over 40 years owning Motor Vehicle Insurance Services and Lincoln Plaza, both of Ramsey retiring in 2012. He was a part-time resident of Palm Beach Gardens, FL where he spent the winter months. Salvatore was a husband, father and grandfather, a parishioner of the Church of the Presentation, Saddle River, a member of the Bergen County 200 Club, the Italian American Club in FL, and a former Mason and Columbian. He is predeceased by his wife of 64 years, Angela Joyce (nee Buglino) in November 2019, and his brother, Frank in 1998. He is survived by his devoted children, Louis A. Riggi (Lisa Conte Schlett) and Linda Riggi Cannizzo, three grandchildren, Anthony Cannizzo (Ellise), Nicholas Cannizzo, and Ashley Riggi Persico (Nicholas), two great grandchildren, Alexa Persico and Cary Francis Cannizzo, and a brother, Louis Riggi, Jr. Visiting Monday 4 to 8 pm. The funeral is Tuesday, October 27, 2020, arriving at the Aloia Funeral Home at 8 am followed by a 9 am chapel service. Entombment St. Mary’s Cemetery, Saddle Brook. In lieu of flowers the family is accepting donations for St. Jude Children’s Research Hospital. The Riggi family is in the care of the Aloia Funeral Home, 180 Harrison Ave., Garfield (973-340-7077). Condolences/Directions visit aloiafuneral.com