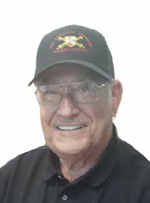 SELIS, William Anthony, age 91, of Wallington, died on December 6, 2020. Born and raised in Mammoth, PA for nine years, he lived in Nutley 24 years settling in Wallington 67 years ago. William was a supervisor for Deluxe Check Printers in West Caldwell retiring in 1986, he was an Army veteran serving during the Korean War. He was a parishioner of Most Holy Name RC Church, Garfield, and was a member of the Garfield VFW Post 2867. He is survived by his devoted and loving wife of 67 years, Dorothy (nee Donatelli), two children, Billy Selis and wife Mariann and Laurie Rocciola and husband John, three grandchildren, Dana Selis, Gina Simmons, and Mark Selis, two great-grandchildren, Owen and Gianna Grace, and a sister-in-law, Genevieve Kelly. Visiting Wednesday 2 to 4 pm and 7 to 9 pm. The funeral is Thursday, December 10, 2020, arriving at the Aloia Funeral Home at 8 am followed by a 9 am mass at Most Holy Name RC Church, Garfield. Interment St. Nicholas Cemetery, Lodi. In lieu of flowers the family is accepting donations to Most Holy Name Church, Garfield. The Selis family is in the care of the Aloia Funeral Home, 180 Harrison Ave., Garfield (973-340-7077). Condolences/Directions visit aloiafuneral.com